Pretty quietly Azure has released the option of using redundant VPN connections. In this case, the gateway in Azure actually gets 2 external IP addresses that our on-premises Firewall can connect to. In this chapter, a small update on the Juniper SRX, BGP to Azure post. So that after following this guide, you can actually use redundant connections.

Not only does Azure now support 1:2 redundant connections as shown above, it is actually possible to also create a multiplex architecture where two on-premises firewalls connect to both Azure GW VM’s

Unfortunately I only have 1 external IP address and thus can only try the first option. Perhaps later I can show you the second architecture too.

Let’s start: First of all we need to initiate the dual gateway setup, you can follow the guide here https://docs.microsoft.com/en-us/azure/vpn-gateway/vpn-gateway-activeactive-rm-powershell

I just deployed this directly 1:1, but obviously it is also possible to use your existing VNET, although your exiting gateway needs to be deleted. And be aware that the required Gateway SKU needs to be HighPerformance.

Once it has been created, you need to configure your SRX, and for this we do the following:

First, I created the new Interfaces in SRX

As you can see, I’m at interface st0.6 and st0.7. Next is the Ike Configuration

As you can see we actually have 2 Gateways configured (azure2-gateway and azure3-gateway) each has its own external address. The Azure-Proposal and azure2-policy determine the encryption parameters and presharedkey.

And the next part is the Security IPSec configuration.

As you can see, we define two different VPN’s but each using the same policy configurations. We bind them to the two created interfaces and use the two created gateways.
The next part is the BGP part. When you created the Azure Gateway you will have received the information you require for this part.

As you can see, we have defined the local address (the IP address of the firewall itself), and created a single BGP group called azure2. Within this group we set the peer-as to match the ASN number retrieved from the Azure Gateway and add two neighbor addresses in the configuration. These also come from the Azure provided information. The local-as ASN number is the one we set on the “local gateway” object in Azure. The ASN used for the Azure gateway and the ASN number used in the local firewall must be different.
Next is the routing-options. We need to tell the system which interface to use to reach the Azure internal IP addresses for the gateways:

As you can see, we added two routes in the static routing options (host only by specifying /32) and set the next-hop to match the two interfaces we created.
To finish it off, we need to specify some policies and set the flow parameters

In the example above, we create 2 policies, from the security zone Azure to Internal and vice versa. We also have created the Azure zone and set the address to include the two subnets created in Azure.
This all should do the trick.. and to validate this, you can exit the configuration mode and go into the cli mode and run show bgp summary:

As you can see, the BGP summary shows that my two peers use the correct addresses, and that packets are going in and out (these are not the VPN packets, but the BGP protocol exchanging information). 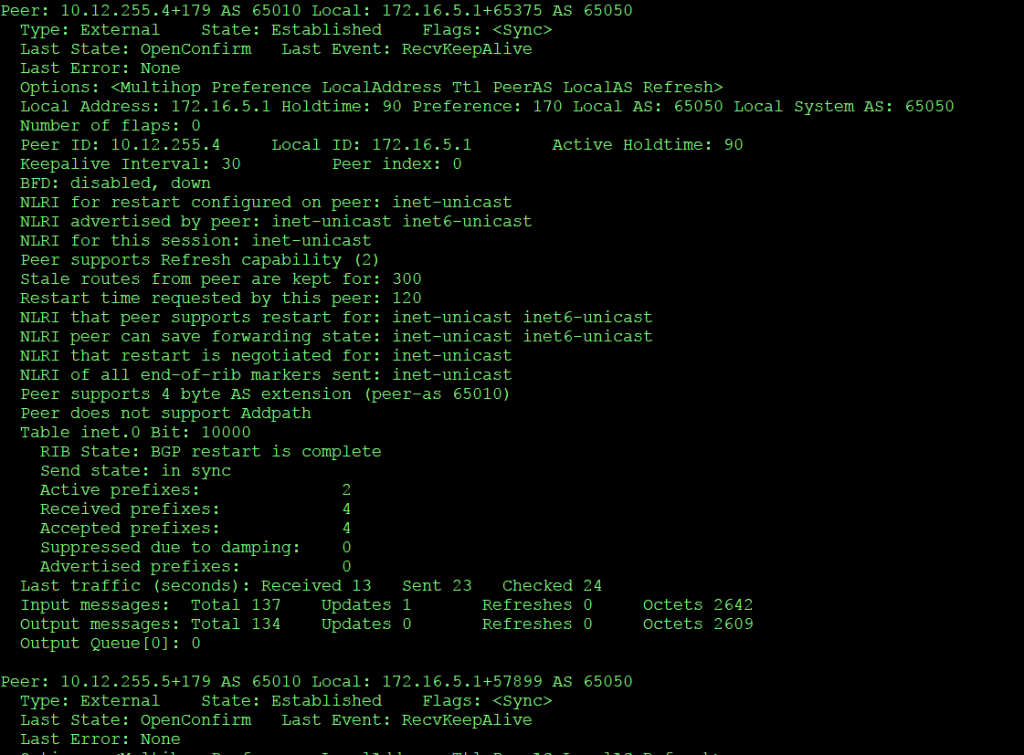 Show route actually shows you all the information that has been exchanged.

And that is it.. redundant VPN connections to a single Azure Gateway using two public IP addresses.